The idea that Warsaw, Indiana-based Streven Distilling’s Streven Vodka will be replacing Tito’s or Ketel One on the shelves of your favorite local watering holes anytime soon might be a stretch for this start up distiller. However, that hasn’t prevented owner Mitch Miller from striving to achieve the same quality you would expect from those high end vodkas in his own product. While worldwide dominance might be far off, battling for space on some of your best friends’ liquor shelves and wet bars isn’t a stretch of the imagination. Once you’re into the hearts (and mouths) of the people who belly up to those public bars, it’s just a matter of time before bar owners start taking notice. If the buttery-smooth vodka that I was able to enjoy is any indication, it’s just a matter of time before you start seeing Streven’s products in more bars around the area.

Despite being busy with his full time job at family-owned Instru-Med and running Streven, Mitch was kind enough to answer some questions for me and give me a tour of his distillery. If you know Mitch, you’ll find it easy to root for him and his family as they chase their passion just as adroitly as they chase their two (yes, I said two) sets of twins.

Share a little bit about how Streven got started. Where did the name come from?
It has been my goal to own my own business for as long as I can remember. After graduating from Warsaw, I chose to attend Ball state because of their nationally ranked Entrepreneurship program. Since graduating from Ball State, I have worked in various sales and marketing roles within the medical device industry. In 2012, my wife Ashley and I moved back to Warsaw from North Carolina so I could join the family business, Instru-med.

In 2016, we started Streven Distilling Company. We really wanted to incorporate something into the name that had some meaning related to “twins” since this was going to be Ashley and I’s family business with our children, but we really couldn’t come up with anything that also worked for a distillery. In our search, we did come across the word “Streven” (pronounced like streh-ven and not streeven) which has etymology including to “strive”. We immediately liked the name and thought it would be excellent for our vodka.

Knowing vodka would be the first spirit we launched, we kept the name for the distillery, although as we release different spirits our plan is to have separate brands for each spirit. So a house of brands as opposed to a branded house if you will. Gin will be our next spirit which is under development now and hopefully out within the next 2-3 months. The gin will be called “Gevell”.

Did you have any experience with distilling or the liquor industry in the past?
Being a part of Instru-med offers many of the same opportunities and challenges of running any small business. That being said, the desire to start something from scratch has always been there. This is something Ashley and I discussed countless times over the years, but we always came back to “what would we WANT to do?” We have 4 small children under the age of 6 (2 sets of twins), so I think we both understood the amount of work it was going to take to maintain our day jobs, raise 4 kids and start a new business. Whatever we decided to do, we knew it would have to be something we were passionate about.

What have been some of the biggest challenges so far?
We started in 2016 but just released our first spirit in 2018. Part of that reason is that the federal permit took 200+ days to approve. Then a few more months for the state permit. The federal permit requires with the application either ownership of the building, or proof of lease, finalized floor plan layout, equipment list with serial numbers, security statement, surety bonds … and about 50 other things before they will approve. Therefore, you basically have to have everything in place before you can even apply and then wait 200+ days for the approval. While waiting, none of the equipment may be used. Only after the permit has been issued is it legal to use the equipment … but then you still have to get the piece of paper from the state. 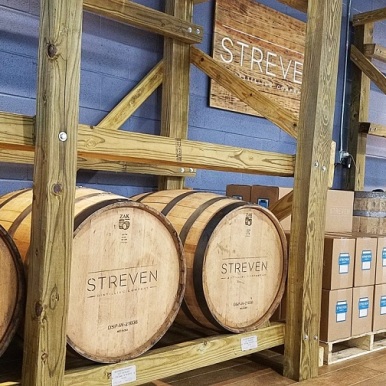 Ageing bottles of bourbon at Streven. 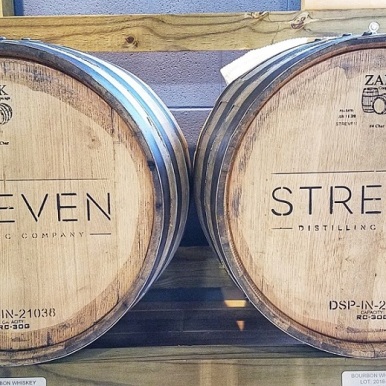 Can’t wait to see how the bourbon from Streven Distilling tastes!

After 2 years, we could start. Being that bourbon is the spirit I’m most passionate about, we will have even more waiting for that to age. Federal law requires a “straight” bourbon to age for a minimum of two years in new charred oak barrels and then four years is the minimum to not require an age statement on the bottle. That means we will need to keep barreling bourbon into the future long before we ever expect to sell any.

Are there plans for a tasting room in the future?
Right now we do not have any plans for a tasting room. However, in November we will have met the state requirement to transfer our current permit to an “artisan” which would allow for retail sales out of the distillery. It has always been our plan to put our focus on selling through distribution and try to make great products that the local retailers and on/off premise businesses would carry.

It’s hard for locally-owned distilleries to set themselves apart. What do you think Streven offers that others might not?

It’s awesome if people choose Streven because we are local but if put to a blind taste test, our spirits need to stand on their own.

One of the things I think we are doing different is starting small and really just putting all of our emphasis on making excellent spirits. Supporting local is great but if you don’t have an excellent product, the novelty of buying “local” is going to wear off pretty quickly. It’s awesome if people choose Streven because we are local but if put to a blind taste test, our spirits need to stand on their own. I want people saying, “That’s an excellent vodka”, not, “That’s an excellent vodka for being made in Warsaw.”

Are tours currently available? If so, what are the hours or how can people arrange them? Where can people currently enjoy or buy Streven products?
People are welcome to the distillery and can connect with us on Facebook to setup a time for a tour. I just can’t legally sell spirits retail yet until we have our artisan permit. For now, they are available at Service Liquors East, Handy Spot, Mad Anthony and Rua. I’ve been in contact with a bunch of other places in town, so we’re hoping to be on the shelf at Oak and Alley, 110, Noa Noa, etc.

Disclaimer
Mitch’s brother Matt brought me a half bottle of Streven Vodka which I thoroughly enjoyed in multiple Moscow Mules with multiple people in various states of dress. I also got a hat from Mitch which I wear all the time. I didn’t ask for either and they were given to me with no expectations and did not influence my opinion. I believe Matt just thought I loved vodka (I do) and I think Mitch just thought I would look sexy in the hat (again, I do). 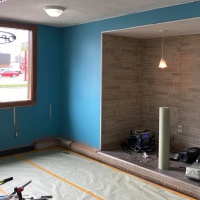